For your listening pleasure.....

I have really been enjoying cooking lately. I love to read different blogs or magazines and try out a new recipe every week. For example, last week I made some super yummy granola bars from Smitten Kitchen. This week I made Chicken Posole from Real Simple My problem is, though, a lot of times the recipe that I'm trying calls for some obscure item that I typically don't shop for. Last week it was cream of wheat. I scoured the Publix isles for at least 30 minutes along with the help of 3 different Publix workers, only to find that they didn't, in fact, have cream of wheat. This week, for my soup, it was Hominy. Who in the world has ever heard of Hominy?!?!


Luckily, Mama Malone always knows how to point me in the right direction. Look at her...isn't she a gem?? 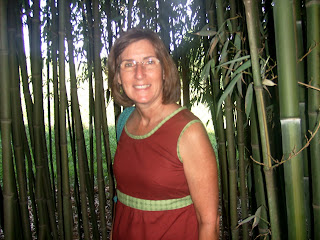 If I had a dollar for every time I've called that woman from Publix saying, "Have you heard of (enter obscure item here)?? Where do you find that in Publix??" I would be a very rich woman.

This week I called Mama asking about Hominy. I was flabbergasted that she knew what it was (made her even that much cooler in my book). She told me it was a kind of grits and to look for it in the corn section. Hominy = Corn, who knew?? So to the corn isle I marched and TA DA. There she was! This is what the can looks like so you have a little direction when surveying the 5 shelves of corn. I'm telling you, blink and you'll miss it!! 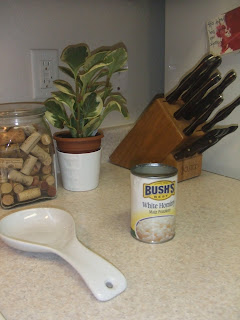 So like I said, tonight I made Chicken Posole. Its from Real Simple Magazine. You can find it in the October 2009 issue. It makes about 4 servings, was really tasty, really easy, and only took about 25 minutes to make. So without further ado I give you chicken Posole...

Here is what you'll need.

1 onion (I used only half of a sweet onion and it worked fine).

1 28-ounce can diced tomatoes (the recipe says to drain them, but I didn't and it was just fine)

And here is what you do.

Heat the oil in a large saucepan over medium heat. Add the onion and 1/4 teaspoon each of the salt and pepper and cook, stirring occasionally, until soft and beginning to brown.

Add the broth, tomatoes, crushed red pepper and bring to a boil. Stir in the chicken and hominy and simmer until heated through. Squeeze some lime juice into each serving and toss the lime into the serving as well.

And this is what it looks like when its done 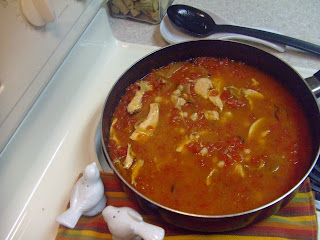 I tend to be a bit messy when I cook. Sugar loves this quality about me. Here she is anxiously anticipating a spill 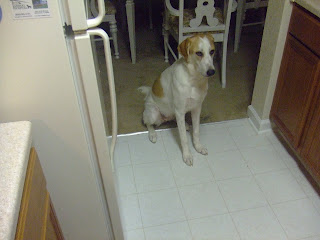 Aaaaaand patience usually pays off in her mommy-dearest's kitchen 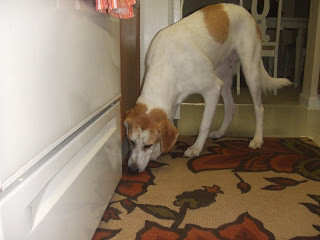 Posted by Sugar Mama at 11:00 PM No comments:
Labels: cooking

Over the past 16 months of working night shift I have noticed a very common theme in my routine - list making. There is something about this place that makes me think of ALLL the things I want to do, shop for, make, learn, etc. (Note: more often than not the things on these lists have nothing to do with each other.) I grab a little piece of stockcard from the secretaries desk and go crazy with inspiring ideas that I have every intention of carrying out, but then 7am comes and its all I can do to brush my teeth and wash my face, collapse onto my bed and burry myself under my sheets and down comforter.

Well tonight was no different except I had the help of the new October edition of Real Simple Magazine to make my list grow. And add to the equation 16 oz of energy in a can. Suddenly on my little cardstock I had an entire new wardrobe for the fall, a month of dinner recipes to make, new hair products to try, and a handful of pottery barn items I simply must have.

Most likely tonight will end like most nights with me falling asleep and forgetting about my long list of goodies, but here's to hopeful wishes for a new beginning.
Posted by Sugar Mama at 4:19 AM No comments:
Labels: lists
Newer Posts Home
Subscribe to: Posts (Atom)

Sugar Mama
Fort Lauderdale
A blog about a girl, her dog, and all of the things that inspire them. Enjoy : )